Hooboy! Is it just me, or does it feel like everything is really starting to unravel? Pandemic, wildfires, monster hurricanes, health care systems collapsing, civil unrest and societal breakdown, including angry people, with guns, losing control and, of course, crazy people with computers, losing their minds; all fun stuff to the far-right, evangelical end-timers, especially if they can make money stoking fear, while awaiting the Lord’s next prophetic message. Whatever, we’re all in this together, whether we like it or not. We’re all stuck on this big ball of dirt by gravity, actually. Everything is stuck here unless one has the means to briefly escape gravity’s hold. I learned about gravity in science class, probably. I also ate a sugar cube with a vaccine on it, to protect me from smallpox. Everyone had to do it. I remember looking at the sugar cube and the top of it had turned slightly yellow from the dose of vaccine dropped on it. Then I put it in my mouth. It tasted fine and was better than a shot. I don’t remember what I did the rest of the day. I was very young. But none of this is news to anyone. You can look around and see the mounting chaos and everyone knows that sugar cubes were used for three things: (1) to sweeten coffee or tea, (2) as a vaccine delivery system, and (3) LSD parties. I can’t enlighten you much on any of the current hot topics. You already know about Covid, January 6th, and massive wildfires. As I write this, New Orleans, and much of Louisiana, has no electricity, because a Category 4 hurricane, fueled to that intensity by the very warm gulf water, just slammed into it. I know you’ve heard about climate change and gravity. You might even know more about both than I do. But I’m a curious human, so science has always seemed to be something worth considering in certain situations. I don’t always agree with the means by which various scientists achieve the answers to their questions, but, specifics aside, science is A-OK. Let’s hear it for the positive ways science has impacted our lives! Hip, Hip, Hooray! I mean, I am sure science was involved in figuring out how to make vegetarian corn dogs taste like regular corn dogs. By the way, this is a great time to be alive if you don’t eat or wear animals. A staggering number of options are available now which were only futile wishes 25-30 years ago. Jeez, even 10-15 years ago.

But none of that is why we’re here today. There’s a much bigger problem afoot than anything mentioned above. I worry that most people are becoming too accustomed to what I call “lazy listening,” which is, basically, listening to music over just your phone, without connecting external speakers or using headphones. Come on, admit it. I’m guilty of this, as well, but am making a change because the music deserves it. Recording musicians spend a lot of time honing the sound of their “masterpiece” and the end result generally involves a wide range of resisters and tones, including both the high AND low end. There was a time when bass was important to all listeners, not just those guys in pickups. Boomboxes were all about the bass. Now it seems like high-end-only facsimiles, squeezed through smartphone speakers the size of crickets’ heads, are fine with most folks. When I was a pre-teen, I got a transistor radio for Christmas one year. It had only a place to plug in a cable with an earpiece. As I got older, sound quality improved dramatically for all. Extreme stereo was thrilling! Hordes of people got way into the fine art of high-fidelity (HiFi) listening. Refined tuners, turntables, and speakers became a lot more expensive and desirable. This journey into the ultimate aural experience lasted until cassettes began to rival vinyl LPs in sales. Cassettes were convenient and portable. Vinyl record albums, not so much. Then CDs popped onto the scene and, at first, it appeared there was going to be a return to sound quality being scrutinized. But, no. The wonder of the crystal-clear sparkle of CDs was short-lived. Maximum volume became the new rule. Everyone only wanted their track to just stand out when/if it was played somewhere. Dynamics, in particular, really suffered and it was, in some ways, the beginning of a new end. Brave Combo has spent a lot of time in myriad recording studios over the years. They’re fun places to be and the point of the fun is to craft something new and special. Consequently, much of the time is spent creating the perfect balance of sound, which really requires the eventual listener to take that next step and connect a couple of speakers or put on headphones, to fully appreciate all the effort. In most cases, the difference is eye-open…I mean, ear-opening! This is an important topic, which I hope you will take to heart when your favorite artists post new songs and videos. Okay, now that I have made you feel guilty and willing to please, here’s a new video for you to check out. Ear-bud time! You know, I don’t even care if people see me walking down the street and say to their friends, “Hey, there’s that guy who wants people to go to a whole lot of trouble when they listen to his stupid music. What a self-centered jerk!” It would be pretty funny, though, if this became a big political issue and a bunch of people became anti-external speakers on smartphones.

Okay, fasten your seat belts! Brave Combo is, theoretically, returning to the stage, and, theoretically, playing a bunch of gigs, starting right now! We encourage everyone, who is vaccinated, to attend the show(s) of your choice and, of course, practice healthy protocol. All of our upcoming wing-dings will be outside or in gigantic tents or halls. No indoor clubs for a while, still, which really, really sucks. Bands like playing packed rooms, where bodily fluids fly freely, and viruses easily spread. Having the audience’s sweat rain down on me used to be exciting. Now it’s hard to imagine. But perhaps the experience of live music isn’t dependent on just one or two typical scenarios. Maybe live music can still be uplifting even if your mouth and nose are covered up and you’re not packed in like sardines with everyone else.

Well, I have expressed myself again and you have read to this point, I assume. Thank you! Now, go out and pick up some new groovy speakers for your phone. They are everywhere!

And, of course, come to one or several BC shows this fall. Outdoors and safe! Now! Let’s Polka (but only with someone you know very well)! It’s Party Time (within reason, keeping a healthy distance from other partiers)! There’s a new kind of wild in town and it hasn’t been defined yet!

Get in the festive spirit as the UNT Alumni Association hosts its second annual holiday concert featuring Denton’s own Brave Combo, a band that’s gained fame around the world but

Get in the festive spirit as the UNT Alumni Association hosts its second annual holiday concert featuring Denton’s own Brave Combo, a band that’s gained fame around the world but whose UNT alumni pride runs deep! Enjoy seasonal tunes and Combo classics on the new outdoor stage at Denton’s Rubber Gloves Rehearsal Studios, owned by UNT alumnus Rob Houdek (’78). This FREE concert is family-friendly and open to all.

PLEASE NOTE: For entry, Rubber Gloves Rehearsal Studios requires proof of a negative COVID-19 test taken no more than 72 hours before event date for all guests age 18+. Alternatively, attendees may show proof of COVID-19 vaccination. Thank you for respecting the venue’s policies.

NEED A LYFT? Use our code UNTCOMBO for a $20 credit on a Lyft to the event!*
How to use the Lyft code:
In Lyft app, click on the menu button in the top left corner.
Click on “Payment,” then scroll down to “Add Lyft Pass.”
Enter the code UNTCOMBO.
*Can only be used on the day of the event. Limited to first 30 users. 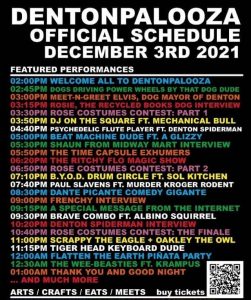 From the October Machine’s Pump Newsletter:

“THE MOST DENTON THING I’VE SEEN IN A LONG TIME. Denton artist/entrepreneur, Joey Liechty designed a poster promoting a fake event, DENTONPALOOZA, listing a bunch of eccentric characters unique to the Denton area. The poster was beautiful and got a lot of attention. Soon people wanted shirts of the poster AND to attend the event, itself. Here’s the poster.  So, Joey decided to get as many of the local weirdos together as possible, which he’d originally just listed off the top of his head, to perform at a real festival. It’s happening. Brave Combo was one of the lucky weirdos on the original poster, so at 9:30 PM we will be enthusiastically performing a couple of the songs while a person dressed as an albino squirrel dances with us. And this is just one performance. DENTON PALOOZA will be at Rubber Gloves (outside) on Friday, December the 3rd.”

THE FUTURE. I was just driving home from the Brave Combo World Headquarters in hideous downtown Denton. I say hideous because of the mangled streets, … END_OF_DOCUMENT_TOKEN_TO_BE_REPLACED